The Vancouver Fraser Port Authority is continuing its pursuit of adding a second container terminal on Roberts Bank (RBT2). It is now undergoing a Panel Review under the Federal Canadian Environmental Assessment Regulations. Unless RBT2 is subjected to a rigorous review - which never happened with the Deltaport Third Berth Project - then the container port capacity on Roberts Bank will TRIPLE its operations by the time RBT2 is fully functional - likely in the late  2020s. 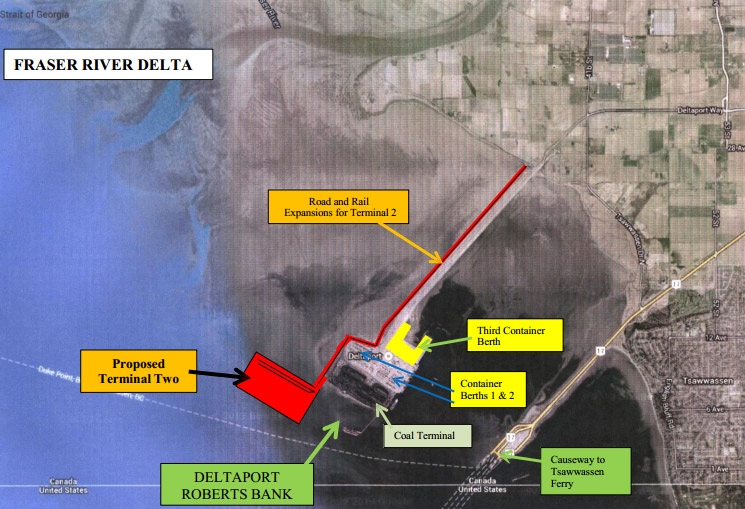 The footprint of the RBT2 man made island, to be built in Georgia Strait, is over one third the size of Vancouver's Stanley Park. In all the T2 development will destroy over 1000 hectares of Fraser Estuary habitats of "endangered" orca whales and salmon. It is also likely to destroy critical feeding grounds for migratory and other shorebirds that rely on Roberts Bank.This damage cannot be mitigated.

The infrastructure required to service Terminal 2 includes the South Fraser Perimeter Road (SFPR), Highway 17; an intermodal rail yard; additional railway tracks; and container storage facilities. Not only will these projects industrialize over 1000 acres of prime agricultural land, they'll also require the expenditure of millions of taxpayers' dollars. Some of this infrastructure has already been built on lands behind the existing Deltaport. It includes warehouses, a logistics centre and a Border Services container inspection facility. However that does not mean RBT2 should be built.

The cumulative effects of Terminal 2 should have been assessed with Deltaport's Third Berth Project, as required by the Canadian Environmental Assessment Act. In fact, the SFPR, the Tsawwassen First Nation's container storage facility, the intermodal rail yard and the additional rail track in the Port Subdivision should all be part of a full cumulative impact assessment. However that is not happening.

This piecemeal approach utilized by the provincial and federal governments and their agencies is an outrageous attempt to bypass environmental protection measures and proper public input.

RBT2 must be stopped before it gets out of the starting gate to avoid another democratic travesty like Deltaport Third Berth which, after a flawed and incomplete environmental assessment left many issues unaddressed. Furthermore the habitat replacement for this project failed in numerous areas.